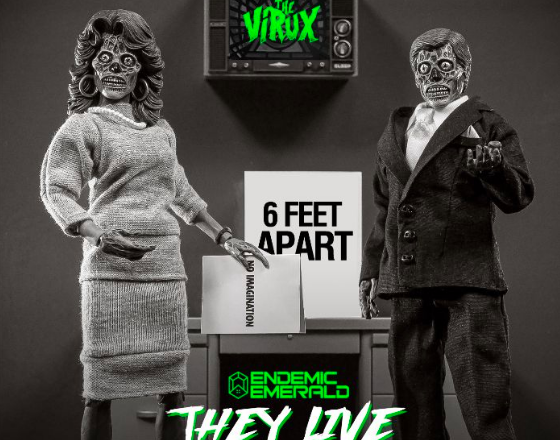 Now more than ever, the thought of a small group of elites pulling the world’s strings seems very probable.  Various agendas appear to get green-lit, accelerated, censored, and/or even halted by what feels like the hidden hand of a wizard behind a curtain.  Some of these very ideas have even been presented to the big screen over 30 years ago in John Carpenter‘s science fiction film, “They Live”.  Today, United Kingdom native and veteran hip hop producer, Endemic Emerald, felt compelled to title his new single, “They Live”, giving a nod to the cult classic movie while also reminding the people not to be sheeple simply getting led to the slaughterhouse.  Endemic explained, “It is time for all to wake up.  So much is happening right in front of our eyes, so it was important to me to warn the people through my music”.

On “They Live”, the New York City-based producer sets the stage with a vocal sample explaining that secret signals are being sent throughout the globe, taking control of minds and pushing a repressive society.  Next, an electrifying soundscape thirsting for some truth-quenching bars welcomes in the dragon-slayer MC, Chris Rivers, who breaks down his thoughts of the “anonymous they” before giving the floor to Revenge of the Truence (R.O.T.) to bat cleanup on this esoteric subject.

For more information and/or to arrange an interview,
please email: galacticpush@gmail.com