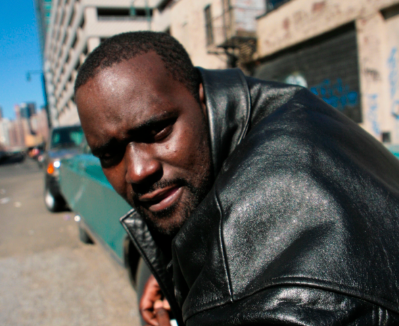 I appreciate a lot of artists/musicians because I feel that music is such a powerful form of expression and a great tool for uniting people. Think about the amount of people who love hip hop from the United States to all other countries in the world. It is not only hip hop but rather musicians and genres of all kinds. Even if you don’t understand the words you can still enjoy the music.

I heard of Poet many years ago but the first time I really got into him was from a Mobb Deep mixtape called Free Agents. I think the track that I heard from Poet was on the bonus disc to this album and the song I am referring to is called The Heat is On featuring Prodigy of Mobb Deep and Godfather Don. I gravitated to this track so much I remember listening to it over and over again.

Here is the track:

The track has a beat that has that subtle but deep sort of sound, hard to describe, but it was a very catchy song. It was a great example of a track that enables you to understand the struggle that the MC’s were describing. After hearing this track I was a die hard Blaq Poet fan and was always looking out for his music. I looked into his group Screwball, got those albums and then got his album Rewind: Deja Screw at Virgin Records in Union Square.

Rewind: Deja Screw is an album that consisted of old and new Poet verses with all new beats. Hence the name, Rewind: Deja Screw. This album had some good features and also production from the likes of DJ Premier, 45 Scientific, Easy Mo Bee, the Alchemist and even Blaq Poet himself. The tracks he produced were nothing to sneeze at so I found out that not only was he rhyming but he was also producing some of his own beats too.

Needless to say, I am a big Blaq Poet fan and he is probably one of my favorite of all time rappers alongside DMX and Rakim. If you haven’t heard of Blaq Poet you should definitely check him out because his rhymes are bananas and he started out way back in the day as a teenager with tracks like All Hell is Breaking Loose and Beat You Down. He was probably one of the first rappers to really go at other artists together on a track. This was way before 50 Cent’s How to Rob track.

Another thing I like about Poet is that he speaks on the street life in his music but doesn’t glorify it. He doesn’t try to make it sound cool that the young audience needs to join. He tells it from his perspective to let you know what he had gone through but never is flashy or glorifying the lifestyle. He is a true MC in every sense of the word and is such a crafty artist the way he puts words together. Another really swift track that he put out is back in the Poet and Hot Day days called This is For My Peeps.

Blaq Poet has also teamed up with collaborator and fellow MC Comet on a couple of albums. They have done a project called Mad Screws (which I think is basically a Comet album heavily featuring Poet) and an EP called Smoke.